Behind the Scenes with a Racing Pit Crew

If you’ve ever watched an auto race on television, you’ve probably seen the racing pit crew hard at work through the event. It’s truly amazing how quickly and efficiently the crew works, and, in fact, it’s often more impressive to watch the crew at work then it is to watch the cars race around the track. 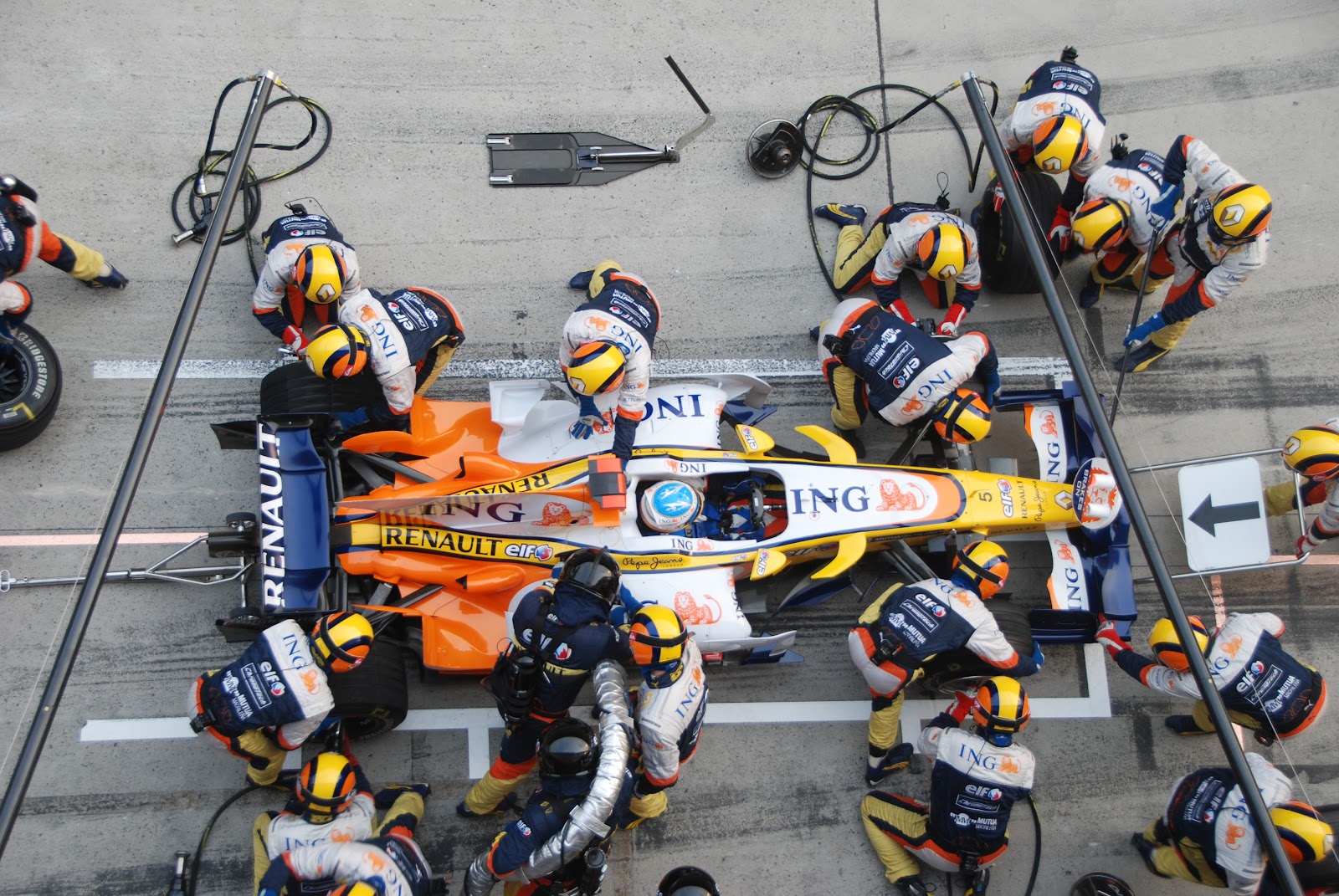 If you want to know how it all works, you must first know the different positions that are involved in the racing pit crew. The front tyre carrier is the person who brings the new tyres to the front of the car. He does this by carrying them over the pit, before mounting them onto studs. He then must take the old tyres back to the wall. The front tyre changer takes out the lug nuts and the old tyre. He then tightens the new lug nuts on the tyre. The rear tyre changer and rear tyre carrier carry out the same tasks on the rear tyres.


When working on a car, the jackman has an important role. In fact, if the jackman fails, you’ll see the entire car fall over. The jackman simply raises each side of the car so the tyre carriers can remove the old tyres on each side. Finally, you have the gasman who, along with his assistant, fills the car with gas using a specifically designed gas can, which allows him to fill the car quickly and safely.  These are the main positions of the pit crew, and no job is more important than the other one. One false move by any member of the team can leave the driver in a lot of trouble.


While working to help the driver, every member of the team must have the right tools, and you’ll see that the people who work on the pit crew have a lot of tools on their hands. When you go to get your tyres changed at an auto shop, you’ll see a work take off your old tyres using a wrench. But this isn’t the way pit crews work. The front tyre changer, luckily, has an air gun that allows him to remove the tyre in just seconds.


When the car pulls into the pit, the driver wants the pit crew to change everything within 12 seconds - which is pretty mind-blowing to think about. One way things can go wrong is if the jack malfunctions or works slowly. In the race pit, teams make use of a special jack that allows the jackman to lift the car with a single pump, which is really impressive, to say the least. Since the jack is made of aluminium, the jackman can move quickly and get to both sides in seconds, saving the driver valuable time needed to get back on the track.


Your average car owner, when going to the mechanic, probably hasn’t put his or her car through too much. On the other hand, when on the race track, drivers put their cars through a lot, often resulting in severe body or tyre damage. This can make it difficult for the jack to lift the car. Piano bars may then be used so that the team can get the car off the ground and change the tyres. These bars simply put more room between the ground and the tyres, allowing the pit crew to slip underneath the car.


While most people can stop by the gas station on the way home, racing professionals don't have the luxury if they want to win the race. The race pit crew has this covered, as the gas man’s jug makes it possible to fill the car with fuel within a few seconds. This can happen while the tyre crews are changing the car’s tyres, letting the driver get back on the track as soon as possible.


Believe it or not, when racing a million dollar car, drivers and their teams will often rely on duct tape to get the job done.  The pit crew team will often use duct tape to adjust the body panels, all to improve the car’s downforce.  Other times, the crew will use duct tape to hold parts together or to regulate the flow of air into the engine, all to give the car more power and keep it on the track.


Sometimes, duct tape isn’t enough, and the pit crew will use BearBond. This adhesive can handle just about any task needed to put the car back together, which is often necessary when there is a high-speed crash on the track. This is professional grade stuff - and it’s hard to get your hands on BearBond - but it works great when the crew needs to put a car back together.


Many people who watch televised races or attend them in person think that it must be easy to become a pit crew member. But no - these aren’t your average mechanics! To work on a pit crew, not only do you need to know all about cars, but you must also have years of mechanical experience and be in great shape. You’ll also have to go to a special pit crew training to learn the ins and outs of working in this fast-paced and crazy environment.


If you’ve ever watched a race and seen the seemingly-chaotic setup, you know that there’s order behind the scenes. It takes a number of hardworking and dedicated people to work a pit crew and make sure that the driver can get in and out quickly. Coupled with the special tools they have access to and the extensive training they undergo, it’s easy to see how these teams of specialised professionals function so smoothly.